For a lot of men joining the armed forces and jumping out of airplanes into harm’s way is all in a day’s work. For those same men however, looking in the mirror day after day and watching their hairline recede is tough to take. Hair loss can cause a loss of self-esteem, a feeling of self-consciousness in public, a feeling of helplessness when it comes to controlling their own physical self and a sense that they’re no longer the handsome buck they once were. Most would gladly take that skydive into harm’s way if it meant they could get their hair back. The good news is that now, they don’t have to.

Hair Transplant Glasgow is the brainchild of Alex McGee, a 10 year veteran of the cosmetic hair transplant industry who has combined his extensive experience with solid working relationships with clinics nationwide to make the experience of real, permanent hair restoration both accessible and affordable.

You Are Not Alone

Hair loss is hard to accept. Many men losing their hair feel as though no one understands what they’re going through. But the fact is they’re not alone. 25-30% of men will experience some hair loss by the time they’re 30 and nearly half of all men will experience noticeable hair loss by the time they’re 50. Enduring the loss of your hair in private is tough enough, but when you’re a public figure the negative aspects of hair loss are even more pronounced.

Take Wayne Rooney for example. Every football fan on planet earth knows Wayne to be the tough as nails captain of Manchester United, as well as the second highest goal scorer in the history of the Premier League. As such he’s one of the most visible athletes in the world. Wayne made his debut as a professional footballer at the age of 16 and not long after began losing his hair. By the age of 25 Wayne’s hair had retreated considerably in classic male pattern baldness fashion. By 2011 though he’d had enough and opted to undergo a highly-publicised Follicular Unit Extraction (FUE) procedure. 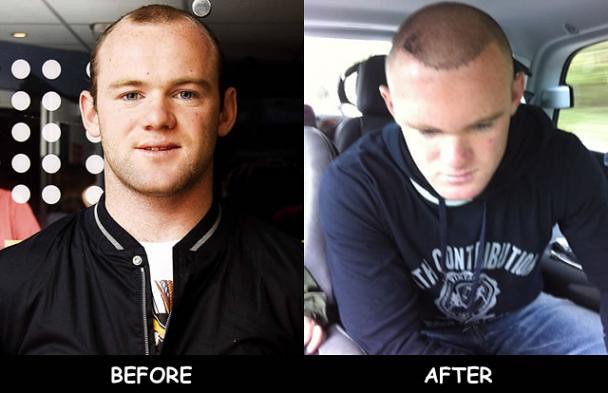 What is FUE and How Does it Work?

During an FUE individual hair follicles are harvested while the patient is under local anaesthesia. Each follicle contains a hair which is then relocated to the area or areas that need to be filled in. The process usually focuses on re-establishing a natural looking hairline first and then moving back across the scalp from there, and indeed this is the method used during Rooney’s FUE. During the FUE process it is not unusual for 3,000 or more follicles to be relocated over the course of one or two days of treatment. The number of relocations and the attention to detail the surgeon exercises when positioning them are the reason the FUE procedure is the preferred method of achieving a truly natural look.

The FUE process can be a bit time consuming but it’s worth it. Typically hair follicles are harvested from the back of the head where, even in men experiencing pattern baldness, hair growth is abundant enough that the relocated hairs are not missed. Also there is no linear scarring the way there can be with strip transplants.

As you can see by the before and after pictures Wayne Rooney is looking good today, enjoying a full head of hair for the first time in his adult life. While it’s well known he underwent a follow up procedure in 2013, this is a perfectly normal occurrence as not every transplanted follicle will take to its new home the first time around and some touch ups are usually necessary to achieve the final desired look.

Am I a Good Candidate for An FUE?

A lot of men have heard of the FUE but have questions about whether the procedure would be right for them. In most cases if you have otherwise healthy hair growth at the sides and back of the head (the typical donor areas mentioned above) you are a good candidate for the Follicular Unit Extraction procedure. There are other factors that may play a secondary role in determining how the FUE process unfolds including hair colour and texture, your skin type as well as your overall health. The specialist surgeon performing the procedure will cover all of these during the preparatory phase of the process.

Can I Afford an FUE or Should I Just Buy a Cap?

There was a time when hair transplantation was a prohibitively expensive proposition. Those were indeed good days for cap sellers. Fortunately, those days have gone the way of the dinosaur. While the FUE procedure still can’t be considered cheap, it is far more affordable today than when it first appeared on the hair restoration landscape. Couple the trend toward lower cost with the fact that Hair Transplant Glasgow are offering a free voucher worth up to £2,000 on certain procedures and you have an opportunity you shouldn’t overlook.

The £2,000 you save on the price of your hair restoration procedure can be put toward additional follicular relocations or, if you like, just to buy yourself some new clothes to go with your new look. While you’re at it take your significant other out on the town with the money you save and celebrate what will certainly be one of the smartest decisions you ever make.

Most men would give up almost anything to have their hair back. Happily today you no longer have to re-mortgage the house or make a deal with the devil to afford effective hair restoration. If you’d like to give your confidence a shot in the arm and feel more comfortable when out in public, simply fill in the contact form on our website or give Hair Transplant Glasgow a ring on 0141-3663-118. If it’s good enough for Wayne Rooney, it’s good enough for you.

From our base in Glasgow, we cover:

Chat With Us Via WhatsApp